We all know the story of Ma¯ui fishing up Te Ikanui-a-Ma¯ui, the North Island. It is a fairy tale, myth or legend to most people. But to celestial navigators and sailing voyagers it is literal, real and true. H¯ı whenua, fishing up land is a navigational term for being able to steer by the stars, moon and planets by night, cross reference with the sun, clouds, and winds, also by the ocean swells, currents and tides, as well as being guided by the birds, fish, seaweeds and other flotsam in the oceans. So when it is said that Ma¯ui fished up islands and new lands, it means that he was able to navigate his way to discover new places based on data received through ancient calculation techniques that still work today. Therefore, once a student could fish the island in theory to the tutor, and was able to undertake voyages as an apprentice and drag and have the island to where he was sitting, then he could “fish the land, as could the fish”. It's like sitting in a railcar and you seem to be sitting still while the countryside is pulled toward and past you. Piripi Smith, a master navigator from Waipu¯reku, Clive, sailed about 50,000km circumnavigating the Pacific over the past 10 years or so using these methods. He has travelled to all the Polynesian islands including Hawaii and Rapanui, into Melanesia to Fiji, Vanuatu and the Solomon Islands and to the Americas, from San Francisco to San Diego, Mexico to the Galapagos, back through Tahiti to Aotearoa. All without using GPS, sextant or satellite phones. About 3000 years previous, Ma¯ui and his brothers had already fished up these lands and islands and through oral and carved traditions this knowledge was passed down to this current generation, although it was retained in remote pockets of the Pacific where sailing was the main form of transport, in the last instant in Micronesia through a mariner called Mau Pialug, the modern-day Ma¯ ui. His knowledge has been passed on to a new generation of voyagers including Frank Kawe, one of our skippers, from Po¯rangahau whose father passed away this month. Back to Ma¯ui and his brothers, a couple of historians have recorded that Ma¯ui with a fleet of six voyaging waka 3000 years ago sailed to Egypt and other Arab countries trading and searching for new lands and destinations. When they found their passage blocked they backtracked through Taiwan and sailed through the Pacific to fish up North and South America before heading further south to fish up other islands including Te Ika-nui-a-Ma¯ui me Te Wakaa-Ma¯ ui. I used these stories to reignite our cultural and trade relationships with the Arab world when we hosted Te Aratini in Dubai last week. In fact I used it in my opening whaiko¯rero. It's been often asked, “Where then is Hawaiki?”. Well another voyaging truism is that Hawaiki is not a fixed place but the island or land you buried your ancestors never to return. So as you migrated to a new land and were buried there, your place became Hawaiki to your descendants and your Hawaiki becomes Hawaikinui. So as generations of descendants keep moving on, the original Hawaiki becomes Hawaiki-roa, then Hawaikipa¯mamao, then Tawhiti-nui, Tawhitiroa and Tawhiti-pa¯mamao. At Te Ao Pe¯hi Kara's tangi at Ta¯ngoio, Ching Tutua, a renowned artist, carver, whakapapa expert and raconteur from Nga¯ ti Awa, sent Te Ao Pe¯hi back to the various Hawaiki, the various Tawhiti then with intellectual flourish he sent him on to Taiwannui, Taiwan-roa and Taiwanpa¯mamao . . . to the chortling and cackling delight of the hundreds of attendees. We cannot allow these oral traditions remain under the nib of pen or by keyboard. I will be staying in Dubai “kua hoki mai ma¯tou, ki Tu¯pai-nui, Tu¯pai-roa, Tu¯pai-pa¯mamao” due to Ma¯ui's ancient visits there. So Ma¯ui-fishing up lands and fishing up untold stories . . . that's another story too. 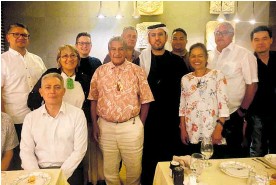