After 49 years as a volunteer firefighter, John Oliver says he’s “seen a lot of things”. But one thing he wasn’t expecting to see was a small black box, containing a medal with his name on it, in the hands of Central Hawke’s Bay Mayor Alex Walker. “The mayor rang me on Wednesday and said, ‘I’d like to come and see you’,” says Oliver. “I explained I was busy, so she came out to the property I was working on and handed me this box . . . and informed me I was a Kiwibank Local Hero medallist. “I was stuck for words. I wasn’t expecting it. I’ve done all these things, but that’s not what I did them for.” Oliver is one of 100 Kiwibank Local Hero medallists nationwide. He is now in the running for the 2022 Kiwibank New Zealand Local Hero of the Year Award Te Pou Toko o te Kau. Semifinalists will be named next month and category winners will be announced at a gala dinner in Auckland on March 31, 2022. Earlier this year Oliver was named Central Hawke’s Bay’s 2021 Civic Award winner, for the hours he has devoted to volunteer work in the Ōtāne community. He was still reeling from that award when the mayor arrived to present his local hero medal. Oliver signed up with the Ō tāne Volunteer Fire Brigade when he was 20, encouraged to join by his father-in-law who was a founder member of the brigade. In the years since, Oliver has put in 49 years with the brigade, 32 as Chief Fire Officer and setting national records for attendance and service to callouts. He has a gold star for 25 years of service, a FENZ Long Service Medal and honorary life membership. Oliver also has life membership of the Waipawa RSA, for his services to Ōtāne’s Anzac Day parades, and honorary life membership of Ōtāne Arts and Crafts, for his help in developing and maintaining the arts and crafts centre. More recently ¯he’s also helped to develop the Otāne Domain netball and tennis courts. “Being a volunteer lets you stay involved with the community, and the more you put into the community the more you get out of it. “No one can make you take on a volunteer role, you have to like it and I have loved every moment of it. There’s huge satisfaction in being able to help others, especially in times of trauma.” As a firefighter, Oliver has attended not only vegetation and structure fires but road crashes, train derailments, a plane crash, and a helicopter crash. There have been long days and nights, with callouts at all hours of the day and night. He cites his family, especially his wife of 50 years Shirley-Ann as “helping and allowing me to achieve what I have”. While his role has at times been confronting, Oliver says he doesn’t feel traumatised by it. “I’m good at talking it out, then focusing on something positive — projects, jobs — and moving on. “I keep an eye on our junior firefighters, check in on them and their partners, but I don’t think you ever get toughened to it. “I’ve seen a lot of deaths, a lot of people hurt, and some people who leave me wondering how they are still here after what they have been through — I’d be a millionaire if I had the answer to preventing some of these crashes. “It can be just a moment of inattention . . . as a motorist you are only 1 metre from a road crash at any time. “I am grateful to everyone who has supported me and enabled me to just drop my tools and go, when I have been needed.” 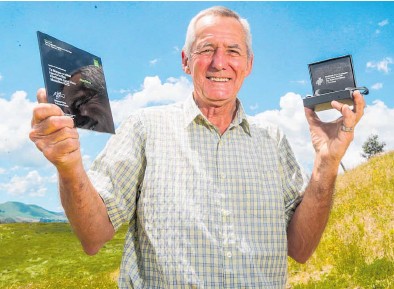